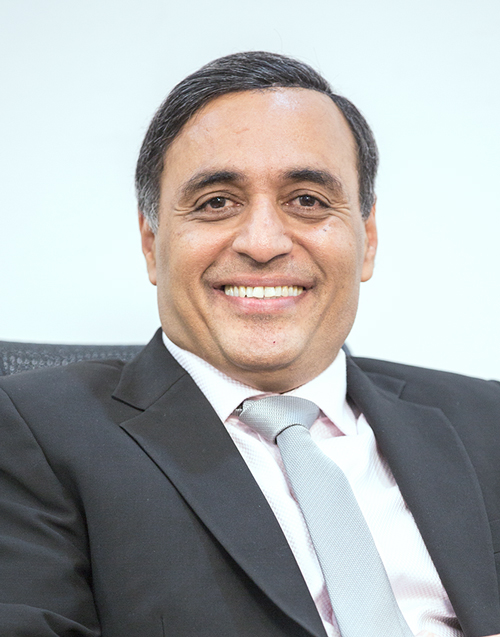 They say that the journey of a thousand miles begins with a single step. That single, momentous step, taken over two decades ago, led to the creation of a formidable leader in the world of biscuits and confectioneries Dukes. This household name started as a visionary dream of Mr. Ravinder Kumar Agarwal. Hailing from a business family, the entrepreneurial spirit was deeply ingrained in Mr. Agarwal’s DNA. He gave up his promising career as a business analyst for stock investments, and launched Ravi Foods Pvt. Ltd., and its flagship brand, Dukes. The products sold under the Dukes banner included biscuits, chocolates and other confectionery items. However, it was his innovative thinking, out-of the-box strategies and disruptive brand positioning that led him to foray into the world of wafers when the big players were still fighting for a bite of the biscuit market.

“The market where the company operates is estimated at about Rs. 45,000 crore and growing at about 10-12% a year. It provides an opportunity for an established player like us to expand, diversify and garner a bigger market share”, Mr. Ravinder Agarwal, MD, RFPL.

Enhancing the formula to elevate taste and regularly adding new flavours are in tune with the ideology of Mr. Ravinder Agarwal, Managing Director of Ravi Foods Pvt. Ltd.

A market leader in the cream wafer category, Dukes has enhanced the most loved wafer brand with natural fruit flavours. Natural fruit extract added to cream wafers such as Pineapple, Strawberry, Mango and Orange now enriches the taste even further.

In addition to the launch of the new packaging and the revamped flavours, DUKES Waffy has also launched a new cream wafer flavour Butter. Butter Waffy, an extension to the DUKES Waffy family, further expands the company’sexisting portfolio. Butter Waffy which has previously not been introduced to the wafer market by any other brand, DUKES Waffy is proud to pioneer this.

“Every idea, innovation and endeavour at DUKES is driven by a mission to achieve excellence in customer satisfaction. Reflective of new-age India and its changing culinary culture”, Arvind Sharma CEO, DUKES INDIA

In order to promote the new Butter flavour and the other fruit flavours DUKES launched four television commercials and digital campaign, which are reflective of young India and its response to packed foods and confectionary. The #BOLOKYA television commercial campaign’s tagline – “KHAO AUR MOOH MEIN SULJHAO!” offer a glance at consumers in the form of riddles or snacks which can be shared and enjoyed.

DUKES Waffy television commercials communicate with the consumers in extremely relatable ways. The #BoloKya campaign celebrates different aspects the brand and the child have in common curiosity, imagination and delight. It delves into how children and people of today are increasingly choosing to invest their time in connecting and engaging in meaningful ways with loved ones and learning something new, while relishing the taste of a snack which can be enjoyed by anyone, regardless of age. The television commercials have been aired in, Kannada, Malayalam, Tamil and Telugu so far for South India launch, with plans to launch the Hindi version later.

The indisputable success of Waffy has caught the attention of leading market players. Despite the foray into the segment by these players, Waffy holds a place of pride. Building on its strength in the South, the brand is steaming ahead to capture other Indian markets. With each step, and new product, Waffy and Dukes, are soaring towards their dream of being the no. 1 brand in India.

To know more about Dukes India log onto www.dukesindia.com & www.dukesway.com

Dukes India operates the http://dukesindia.com/ website, which provides the SERVICE.

This page is used to inform website visitors regarding our policies with the collection, use, and disclosure of Personal Information if anyone decided to use our Service, the dukes India website.

Information Collection and Use
For a better experience while using our Service, we may require you to provide us with certain personally identifiable information, including but not limited to your name, phone number, and postal address. The information that we collect will be used to contact or identify you.


Log Data
We want to inform you that whenever you visit our Service, we collect information that your browser sends to us that is called Log Data. This Log Data may include information such as your computer’s Internet Protocol ("IP") address, browser version, pages of our Service that you visit, the time and date of your visit, the time spent on those pages, and other statistics.


Cookies
Cookies are files with small amount of data that is commonly used an anonymous unique identifier. These are sent to your browser from the website that you visit and are stored on your computer’s hard drive.
Our website uses these "cookies" to collection information and to improve our Service. You have the option to either accept or refuse these cookies, and know when a cookie is being sent to your computer. If you choose to refuse our cookies, you may not be able to use some portions of our Service.


Service Providers
We may employ third-party companies and individuals due to the following reasons:

We want to inform our Service users that these third parties have access to your Personal Information. The reason is to perform the tasks assigned to them on our behalf. However, they are obligated not to disclose or use the information for any other purpose.


Security
We value your trust in providing us your Personal Information, thus we are striving to use commercially acceptable means of protecting it. But remember that no method of transmission over the internet, or method of electronic storage is 100% secure and reliable, and we cannot guarantee its absolute security.


Links to Other Sites
Our Service may contain links to other sites. If you click on a third-party link, you will be directed to that site. Note that these external sites are not operated by us. Therefore, we strongly advise you to review the Privacy Policy of these websites. We have no control over, and assume no responsibility for the content, privacy policies, or practices of any third-party sites or services.

DISCLAIMER OF WARRANTIES AND LIMITATION OF LIABILITY THIS SITE IS PROVIDED BY DUKESINDIA ON AN "AS IS" AND "AS AVAILABLE" BASIS. DUKESINDIA MAKES NO REPRESENTATIONS OR WARRANTIES OF ANY KIND, EXPRESS OR IMPLIED, AS TO THE OPERATION OF THIS SITE OR THE INFORMATION, CONTENT, MATERIALS, OR PRODUCTS INCLUDED ON THIS SITE. YOU EXPRESSLY AGREE THAT YOUR USE OF THIS SITE IS AT YOUR SOLE RISK. TO THE FULL EXTENT PERMISSIBLE BY APPLICABLE LAW, DUKESINDIA DISCLAIMS ALL WARRANTIES, EXPRESS OR IMPLIED, INCLUDING, BUT NOT LIMITED TO, IMPLIED WARRANTIES OF MERCHANTABILITY AND FITNESS FOR A PARTICULAR PURPOSE. DUKESINDIA DOES NOT WARRANT THAT THIS SITE, ITS SERVERS, OR E-MAIL SENT FROM DUKESINDIA ARE FREE OF VIRUSES OR OTHER HARMFUL COMPONENTS. DUKESINDIA WILL NOT BE LIABLE FOR ANY DAMAGES OF ANY KIND ARISING FROM THE USE OF THIS SITE, INCLUDING, BUT NOT LIMITED TO DIRECT, INDIRECT, INCIDENTAL, PUNITIVE, AND CONSEQUENTIAL DAMAGES. CERTAIN STATE LAWS DO NOT ALLOW LIMITATIONS ON IMPLIED WARRANTIES OR THE EXCLUSION OR LIMITATION OF CERTAIN DAMAGES. IF THESE LAWS APPLY TO YOU, SOME OR ALL OF THE ABOVE DISCLAIMERS, EXCLUSIONS, OR LIMITATIONS MAY NOT APPLY TO YOU, AND YOU MIGHT HAVE ADDITIONAL RIGHTS.

DUKES India shall make reasonable efforts to include up to date and accurate information but disclaims all warranties conditions, expressed or implied, as to the quality, accuracy, timeliness, completeness, performance or fitness for a particular purpose of the contents of this website. DUKES India shall not be liable for any damages of any kind arising out of user has access or inability to access this website or user has reliance on the information contained within the website.

DUKES India makes no warranty that the contents of website are free from infection by viruses or anything else which has contaminating or destructive properties.

Certain links on website lead to resources located on servers maintained by third parties over whom DUKES India has no control. DUKES India accepts no responsibility or liability for any of the material contained on those servers.

By accessing or using the Service, user agrees to be bound by all of these terms and conditions.

These Terms and Conditions shall be governed and construed in all respects under the laws prevailing in the territory of India. Any dispute arising out of the information or services offered on this website shall be limited to the exclusive jurisdiction of the courts of Hyderabad. If the user is located in any jurisdiction in the world where the common, statutory, regulatory or codified law of such jurisdiction would void these terms and conditions in whole or in any essential part (the essential parts being at least, but not only, the exclusive jurisdiction and venue and exclusive remedy provisions, the warranty disclaimers, the limitations of liability and the privacy guidelines and terms of use), or would make accessing the Service illegal, then such users are not authorized to use the Service and, if user do so, he/she shall do so entirely at his/her own risk.

User understand and agree that in no event shall DUKES India be liable to User or any other user of the service for any direct, indirect, incidental, consequential, special, exemplary, punitive, or any other monetary or other damages, fees, fines, penalties, injury, loss of revenue or business or liabilities arising out of or relating in any way to this service, or sites accessed through this service, and/or content or information provided on or through the service. Users acknowledge and agree that they are accessing and using the information and services provided by this website at their own risk and cost.

DUKES India is the sole and exclusive owner of www.dukesindia.com and the copyright, trademarks and other intellectual property rights on all text and graphic images and the information forming part of the contents of this website. This means that User shall not distribute the text or graphics or the contents of this website to others without the express written permission of DUKESIndia; or modify or re-use the text for any commercial purposes. Permission to reprint information in whole or in part contained on this site is granted, provided customary credit is given. Prior permission in writing would be required to be taken if the information is to be used for commercial use.

Dukes India seeks to maintain and enhance the Company’s reputation by providing our consumers high quality products and services. The Company views feedback-(including complaints / compliments) from its consumers as an opportunity to learn and improve for the future and is committed to being responsive to the needs and concerns of consumers or potential consumers and to resolving their complaints as quickly as possible in an amicable manner.

This policy has been designed to provide guidance on the manner in which we receive and manage feedback from consumers. We are committed to being consistent, fair and impartial when handling a consumer complaint.

How consumers can reach us?

What does the consumer provide as an input while registering the feedback?

Consumer shall clearly state the issue and /or answer questions asked to help us obtain all the information required to analyse the complaint. We may contact the consumer to clarify details or request additional information wherever necessary.

To help us investigate the complaint quickly and efficiently we may ask for the following (minimum) information:

Note: We shall record his/her personal information solely for the purposes of addressing the complaint. All personal details shall actively be protected from disclosure, unless he/she expressly consents to its disclosure.